Another modified pattern for you and Yarndango this week.

I made this for my boyfriend for Valentines Day 2012, so this is one of my oldies. I had only been crocheting for a few months when I attempted it, so I was really pleased I managed it because the patterns looks quite complicated for a newbie. Luckily it was very well written.

What was it? A Diablo Sackboy

Diablo is a video game – the third in the series was released recently and I lost my other half to it for a good month. He’d been excited about it for a couple of years before that, so I knew what was coming. I also knew he’d appreciate this present.

So what modifications did I make? Well, the original pattern in the Little Big Planet Sackboy pattern from Nerdigurumi. As you can see at the link, she has him finished with a zipper in her version, like the actual video game character, but I left that out because I was more interested in the shape rather than authenticity (we’re an Xbox 360 household, and Little Big Planet is a PS3 game, so actually isn’t one we’ve played overly much. Not enough to form more than a passing attachment to the character anyway).

I also added some spikes at the elbows, knees and on the back (latter not shown – he’s packed in a box for moving as I write too so I can’t snap a quick shot like I would normally). These were just simple. I also added the big ol’ horns which took more creativity. I crocheted two thin pointed tubes, and wired them to give them the curly shape. To do that, I unfolded a big paper clip, slipped it through the head and slipped the horn tubes over. Sew the tubes to the head and pose away!

I added the big pink diamond too, but nowadays I’d make that a whole lot differently!

Nerdigurumi wrote a very clear pattern, and I didn’t have any trouble following it, so if you fancy making your own Sackboy of any kind (there are some fantastic Sackboy edits out there in the big wide web) give hers a try. If you make a Diablo, get yourself some protection though – Diablo is the bad guy! 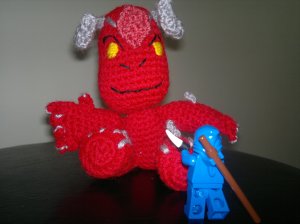 Since I’m moving house and have no internet access until November I won’t be able to respond to comments most likely. I will read any that get posted, and I’ll respond in time, it’ll just take me a while. Thanks for understanding!