A quicky post in celebration of my favourite ever musician, a God amongst rock and roll – Meat Loaf. 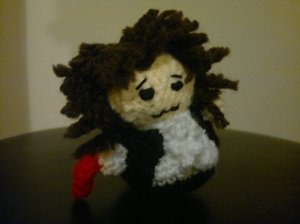 I’m a little bit obsessed when it comes to Meat Loaf. I’m not a music fan really much at all (I’d rather listen to a musical than generic pop, and don’t even get me started on that modern dubstep crap) but the first time I heard Meat Loaf I was twelve years old and my brother put on his greatest hits cd. Life long obsession created.

When I learnt to crochet, I bought probably the book most new amigurumi makers get, Needle Noodles Creepy Cute Crochet. After I made the Cthulhu:

which was a request from my brother (who has him on his desk at work and reports that the most commonly asked question is “What’s the little troll?’) I went on to edit her basic body bits to create my idol. It was easy enough to do – the hair my usual fringe , a slight edit of the one Needle Noodles suggests; a little jacket was made by crocheting a rectangle of black; and the classic red hanky was another crochet square.

I considered sending this to Meat Loaf himself for his birthday. But I’ve just realised that I’m writing this on the 26th of September, his birthday is tomorrow, and he lives in America, so I don’t think I can get it there in time. Maybe next year!

Since I’m moving house and have no internet access until November I won’t be able to respond to comments most likely. I will read any that get posted, and I’ll respond in time, it’ll just take me a while. Thanks for understanding!