Amiguruthi is boldly going where no amigurumi has gone before (probably) – SPACE.

Or near space anyway.

A couple of months ago, I was contacted by a lovely bloke in the states for a commission. He’d seen my Readers Gallery and was interested in the Kerbal I’d featured. We discussed it further, during which I’d said I didn’t make the featured Kerbal and offered to put him in touch with the original crocheter, however he decided he’d like to commission a whole new amiguruthi original from me instead, making a slightly bigger Kerbal for a near space balloon project (one of those where they send up a balloon to the edge of space to take photos). Yup – my yarny creation is going to be an almost astronaut!

This one is called John. His new owner liked him so much he commissioned a second one too, this one with a screaming face: 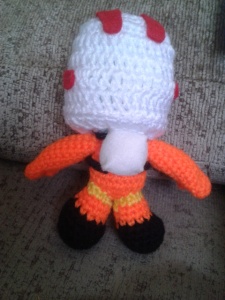 Free pattern is after the jump if you fancy making your own.