Two weeks without an update? Oops. Sorry. Last weekend I gave myself time off from working to go have a life, and that meant I didn’t get to update. But Halloween is coming up rapidly, and I missed joining in last year for one reason or another so here’s this years super quick sacrifice. Erm, offering. Crochet pattern. That’s the one – this year’s crochet pattern. Extra to the Shrunken Heads of course.

She’s sort of similar to my Cute Lil’ VooDoo Doll, but a bit more, well, dead. Splattered as it says. Handy for keeping the pins at hand of course. So don’t feel too sad – she does have gainful employment. Big Unhappy Slug is still job hunting by the way. Update soon.

Free pattern after the jump.

END_OF_DOCUMENT_TOKEN_TO_BE_REPLACED

Howdy. A day later than usual I know, but forgive me – I was re-jigging a totally awesome pattern for you.

Earlier in the week, I was watching the ever fantastic QI, a British TV panel comedy show based around general knowledge and random facts, presented by the wonderful Stephen Fry. The episode featured shrunken heads, and Mr Fry gave out some genuine fake shrunken heads from Ecuador (I think – I may be wrong with the location!). They were made from goats skin, not humans, but straight away I wanted to crochet one.

I played around with hook sizes a bit, so the one on the left is bigger since it’s made on a 3.5mm E hook and is more true to life, fills the palm of your hand size, whereas the one on the right uses a 2mm hook and is slightly smaller, so would be less distracting to say, hang from your car’s rear view mirror. Add a lavender sachet and it becomes a creepy air freshener.

I spent ages frogging and shaping them, only to remember near the end that Wooly Toons has an excellent pattern on her site too. But her’s are based on the Beetlejuice characters, whereas mine are more aimed towards the real ones. One can never have too many option when it comes to tiny noggings though, it must be said 😉

Free pattern for your own totem after the jump.

END_OF_DOCUMENT_TOKEN_TO_BE_REPLACED

So the call went out on Facebook a month or so back from Teeni of Mad Crochet Lab for submissions of holiday related crochet for a cool project she was putting together – a ball wreath photographed and overlaid with images of crochet related to Christmas. It had to be nothing religious which ruled out my Clanger angel but luckily let me contribute my very first crochet project, a zombie snowman.

There are many, many things wrong with this ami, it’s inside out, it’s not the most even of pieces and my embroidery (and photography!) were not up to much. But it does hold a special place in my heart since it started this whole crazy crochet journey and for that reason I submitted him. Luckily Teeni has as skewed a sense of humour as me because she included him (along with the fine work of many other artists) in the final image: 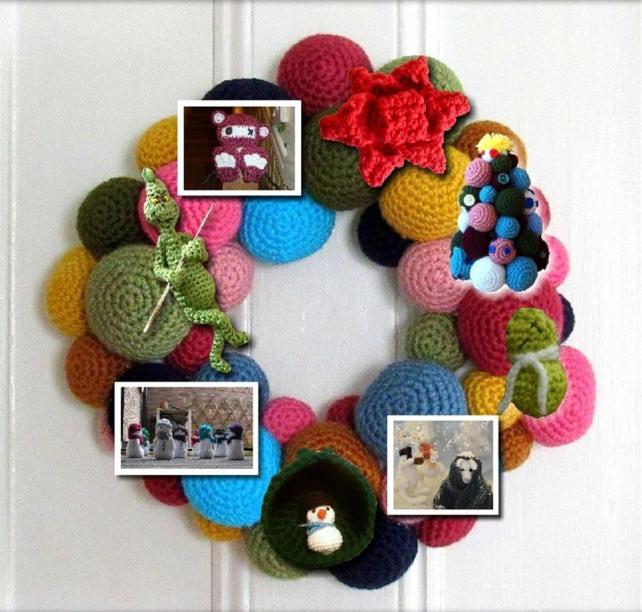 Isn’t it cool? Teeni made it up into some cards and a lucky winner (not me unfortunately!) got sent copies, but I’m going to use my digital copy to make gift tags this year. And next year I may attempt to make a ball wreath myself cos Teeni’s looks gorgeous!

Congrats to everyone who has their work featured – I’m gonna try find a list of who everyone is so I can link spam, but apologies if it takes me a while (Teeni if you have it anywhere I’d appreciate the list!).

The Snowman pattern I used can be found for free by clicking the link.